Exercise ANACONDA 2016 is underway in Poland. Social media tells us it’s the largest NATO exercise in Europe since the end of the Cold War, which may soon be called the First Cold War if things continue on their current trajectory.   Washington Post report on the exercise

The obvious show of military might and committment to the defence of former Soviet satellite states in Eastern Europe is significant.  Whats even more important is the fact that official social media accounts all across NATO are reporting on ANACONDA and other smaller exercises appended to it in unprecedented volume with #Anakonda16

Its a first strong use of social media in the West’s efforts to respond effectively to Russian top general Gerasimov’s new form of “hybrid war”,used so effectively by Russia in the Ukraine.

When they invaded Georgia in 2008 it was with tanks and thousands of troops.  This time, as dictated in Gerasimov’s doctrine, in Ukraine Russia employed numerous forms of deception including the use of out of uniform Russian troops, broad media disinformation in manufactured stories inserted into newscasts and fake atrocities spread virally in pro-Russian communities and around the world via social media. FT article on Ukraine campaign

It worked all too well and the Baltic states, Poland and other former Soviet republics are very worried.  Hence Poland’s repeated recent requests for a standing NATO force in that country.

Its unlikely the west will resort to the kinds of fake reporting in news and social media that Putin’s forces seem perfectly comfortable using but effective use of social media to spread NATO’s message of strength and its commitment to defending threatened republics to all the relevant audiences is critical and thankfully, finally starting. 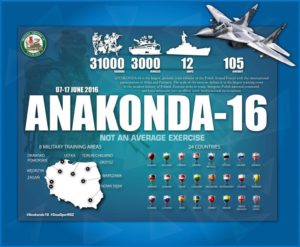 Social Media works.  It has to be planned and analyzed and filled with the right content at the right time.  #AnaKonda16 does just that.